Walmart is one of the top USA e-commerce retailers. In 2016, they were the second after Amazon by sales.

In e-commerce, the conversion is directly affected by how fast the site loads. For many e-commerce companies, making the site faster by 1 second increased the conversion 1.05, 1.1, or even 1.2 times. That’s because the slower the site, the more users abandon it before it loads, and the lesser is the conversion.

Unfortunately, the Walmart site is pretty slow. In my tests, the content of the product page becomes visible only at the third second:

In comparison, for Amazon, the content gets visible at 1.4 seconds. The customer sees the product they came for twice faster!

Let’s analyze the Walmart’s site and see how we can improve the performance – and help Walmart earn more! I’ll use the Lumia 635 product page as an example.

The first issue with the page is that it gets more or less rendered at 2.3s, but the text isn’t visible until 3.0s:

This happens because Walmart uses a custom font, and by default, Chrome and Firefox won’t render the text until the font is loaded. This is how it looks live:

See how the page stays without the text for a second?

(Network throttled with the “Fast 3G” preset in Chrome DevTools)

Flash of unstyled text is when the text was initially rendered with a system font, but later gets re-rendered with a custom one (and jumps around the page). Wikipedia

Browsers delay rendering the text to prevent a flash of unstyled text (FOUT). However, this makes the content invisible for longer – and likely decreases the conversion!

To change this behavior, we can add the font-display: optional rule to the @font-face styles. font-display controls how the custom font is applied. In our case, it tells the browser to just use a fallback font if the custom one is not cached:

Now, when a customer visits the page for the first time, they will see the text immediately, rendered in a fallback font. The browser will download the custom font in the background and use it for subsequent pages. The current page won’t get the custom font – this prevents the FOUT:

Now the text is visible immediately.

(Network throttled with the “Fast 3G” preset in Chrome DevTools. The CSS file was substituted with Fiddler)

With font-display: optional, the font won’t be applied until the user reloads the page. Keep this in mind if you have a single-page app: navigating across routes there won’t make the font active.

Another issue is that the page downloads around 2 MBs of gzipped JavaScript. That’s a lot:

JavaScript code is minified, so I’m only able to analyze it on the surface. Here’s what I found.

Use defer for the first bundle#

About async and defer scripts

Most of <script> tags on the page have either the async or the defer attribute. This is good because the browser can render the page not waiting for these scripts to download:

However, one large file – bundle.3p.min-[hash].js, 112.3 kB gzipped – doesn’t have either of these attributes. If it takes a while to download (e.g., the customer is on a bad connection), the page will stay blank until the script is fully loaded. Not cool!

To be honest, the bad connection could delay any non-deferred script, even the smallest one. So I’d try to defer as many scripts as I can

To solve this, add the defer attribute to this script tag too. As soon as all JavaScript that relies on bundle.3p.min-[hash].js is also deferred (which seems to be the case), the code will keep working fine.

In the screenshot above, there’s code that likely measures the time the bundle takes executing:

This code doesn’t work as expected: because of defer, the bundle executes after both of these inline scripts. Just in case somebody from Walmart is reading this.

Load non-important code only when necessary#

Chrome DevTools have the “Coverage” tab that analyzes how much CSS and JS is unused. If we open the tab, reload the page and click around a bit to run the most important JavaScript, we’ll see that around 40-60% of JS still hasn’t executed: 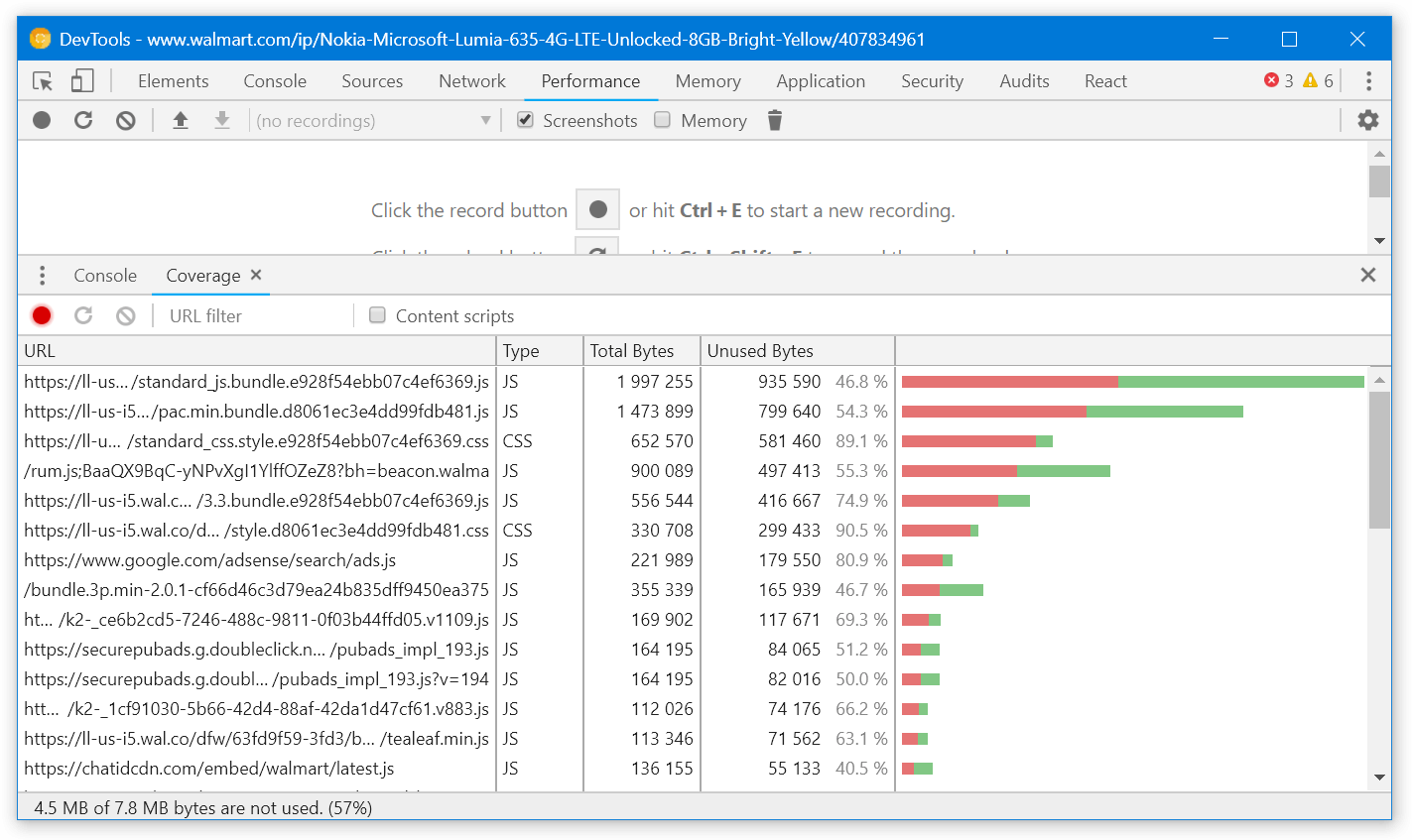 This code likely includes modals, popups and other components that aren’t rendered straight when the customer opens the page. They are a good candidate to be loaded only when actually needed. This might save us a few hundred kBs of JS.

This is how you load components dynamically with React and webpack:

In a real app, you’ll likely want to use react-loadable instead

If we look into standard_js.bundle.[hash].js, we’ll notice that it includes babel-polyfill: 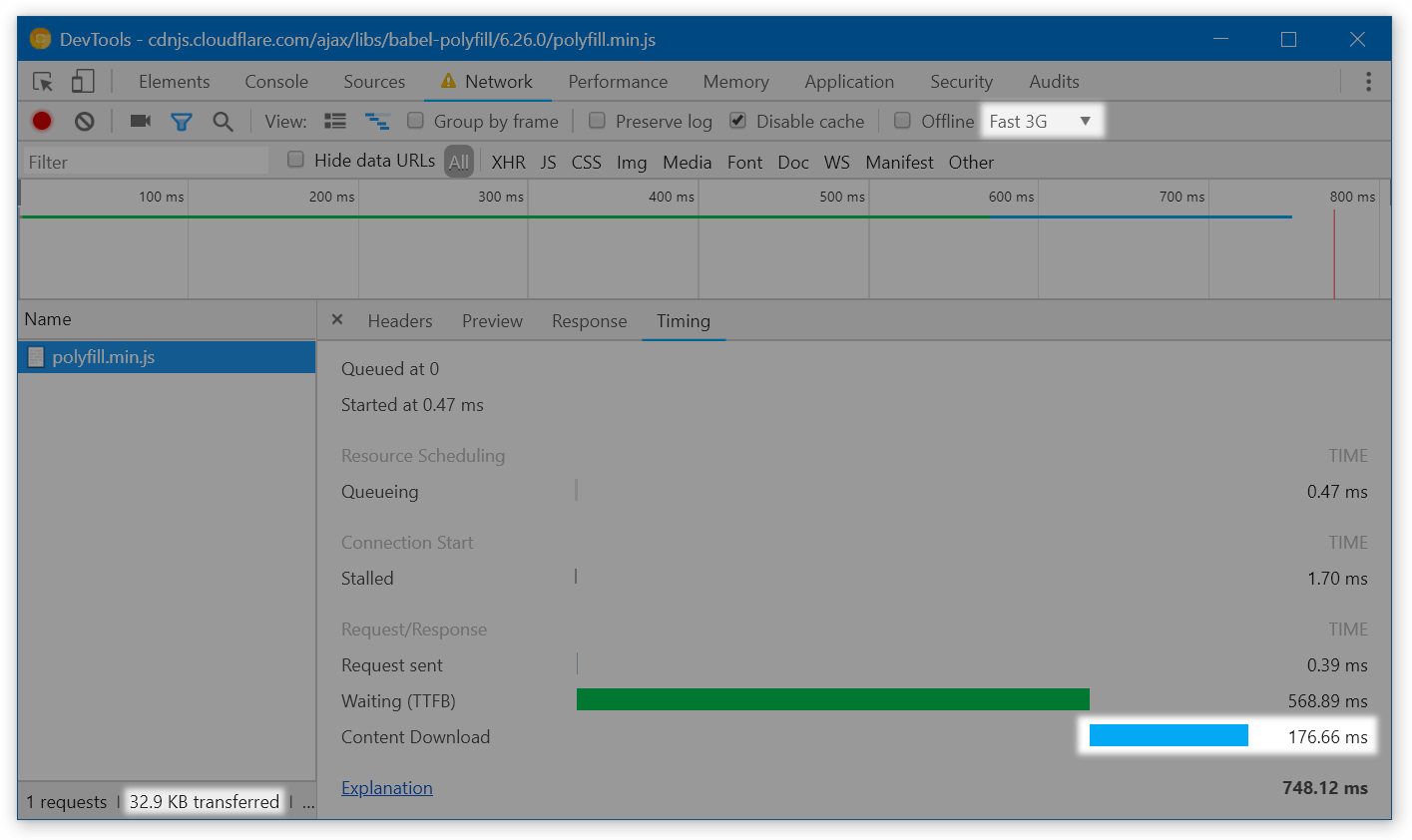 By not shipping this polyfill in modern browsers, we could make the page fully interactive 170 ms earlier! And this is fairly easy to do:

Another problem is that the Object.assign polyfill is served in 3 files simultaneously:

The polyfill is small on its own, but this might be a sign that more modules are duplicated across the bundles. I’d try looking into that if I had access to sources.

By default, webpack bundles polyfills for Node.js-specific functions when it sees them used. Theoretically, this is useful: if a library relies on setImmediate or Buffer which are only available in Node.js, it will still work in a browser thanks to the polyfill. In practice, however, I’ve seen the following happen:

The library is adapted to work in the browser, but because webpack sees that it references setImmediate, it bundles the polyfill.

Node polyfills are small (a few kBs minified), so removing them usually doesn’t make sense. Still, it’s a good candidate to optimize if we were squeezing the last milliseconds from the page. Removing them is super easy (but needs to be tested – what if some code really needs them?):

Apart from JS, page rendering is also blocked by CSS. The browser won’t render the page until all CSS (and JS) files are downloaded.

The Walmart page initially depends on two CSS files. In my tests, the largest of them takes even longer to download than the JS bundle – so it blocks rendering even after the script got downloaded and executed:

If we get this right, we’ll be able to render the page several hundred milliseconds earlier.

In total, the Walmart page downloads three CSS files: one with the font definitions (BogleWeb.css) and two with the app styles (standard_css.style.[hash].css and style.[hash].css). The latter two seemed pretty similar, so I removed all the content except selectors and tried to compare the files.

Guess what? There’re 3400 common selectors among these files – and these selectors mostly have common styles! For the perspective, the first file has around 7900 selectors total, and the second one has around 4400:

That’s a good area to optimize. This won’t affect time to first paint if we decrease the render-blocking CSS properly, but these CSS files will still load faster!

The Walmart site is not a single-page app. This means that, on different pages, the customer has to download different styles and scripts. This makes every other page load longer, especially if the customer visits the site rarely.

We can improve that by creating a service worker. A service worker is a script that runs in the background even when the site is closed. It can make the app work offline, send notifications, and so on.

With Walmart, we can create a service worker that caches site resources in the background even before the user needs them. There’re multiple ways to do this; the concrete one depends on the Walmart infrastructure. A good example of one approach is available in the GoogleChrome repo. 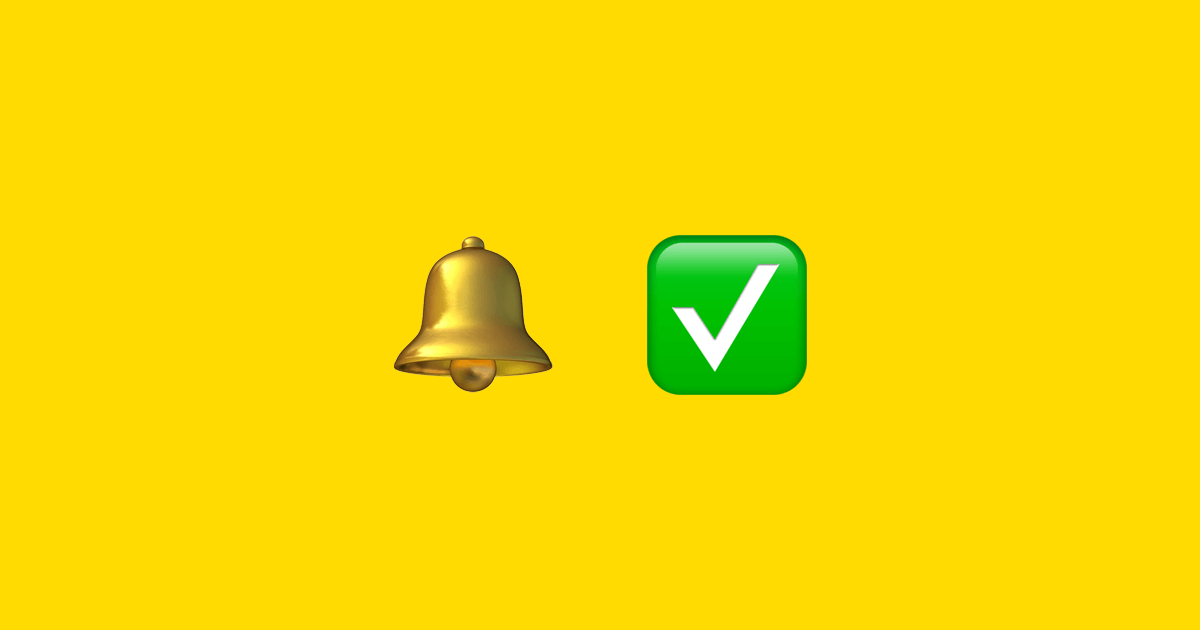 How to effectively ask for notifications

With service workers, we also get the ability to send notifications to customers! This should be used with caution – or we can annoy them – but this can increase engagement too. Good examples of notifications are “The product you saved for later got a discount” or “John Ford replied to your question about iPhone 8”.

There’s still a room for further optimizations. Here’re some things that might also help – but we need to confirm that on the real app:

That’s kinda related to performance too.

To reduce the size of the images, Walmart compresses them on the server side. The client specifies the image dimensions it expects to receive, and the server sends the appropriate image:

In most cases, this is great. However, for the primary product images, this has a negative effect. When buying an expensive gadget, I often make a final decision by visiting the product page to see the gadget, to imagine how it looks in my hands. But when I come to the Walmart site, I see a low-quality image with compression artifacts:

I’d optimize this part for UX instead of performance – and serve images in a better quality. We can still keep the size difference minimal:

So, to optimize the product page on the Walmart site, we can:

With these tricks, we can render the product page earlier by at least 400-600 ms. If we apply similar improvements to the whole site, we can increase orders by at least 3–6% – and help Walmart earn more.

Thanks to Jacob Groß, Vladimir Starkov, and Anton Korzunov (in no particular order) for reviewing this post.

I can analyze and improve your app or site too. I worked with Google, EPAM, Rock Content and others. Hire me

I’m a contracting front-end & Node.js developer. I worked with Google, EPAM, Rock Content, and others. Hire me